Fr. Meyer's Sohn and Flytrans Together Tackle a Heavy Load

IFLN member forwarders Fr. Meyer's Sohn (FMS) and Flytrans have worked together on the door-to-door shipment of a heavy and outsize motor packed inside a huge wooden box measuring 7.4m by 4.3m by 5.2m and weighing in at 53.3 tonnes.

The cargo needed to be moved from the General Electric (GE) premises at Champigneulles, near Nancy in northeastern France, to Hünxe in western Germany. Basel-based FMS was approached by its client, MAN Energy & Solutions, in December last year to organise the shipment and FMS – says its manager project logistics and transports, Robin Schüpbach – naturally turned to Flytrans for its assistance given the already strong relationship that existed between the two cargo agents. 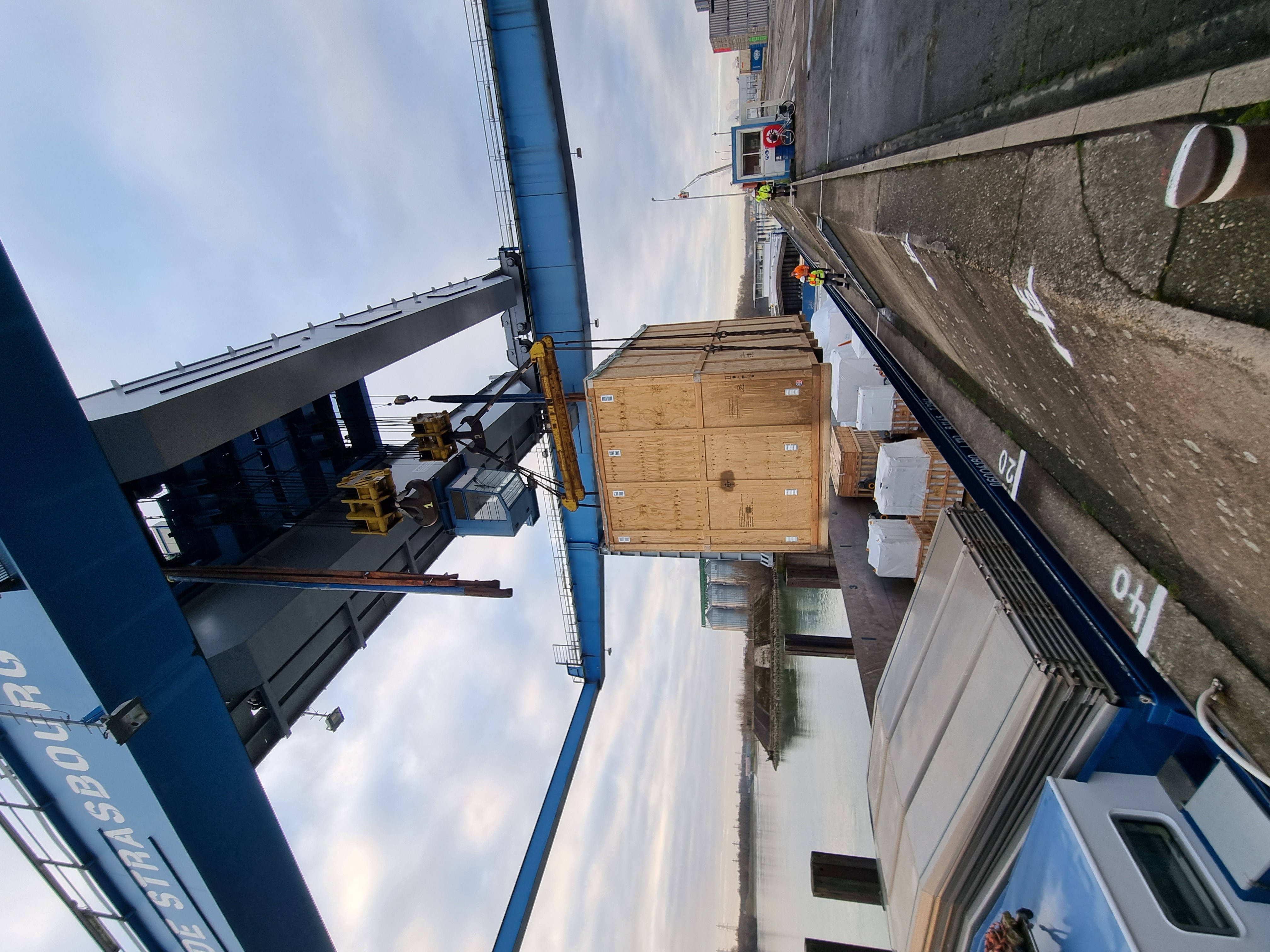 Loading onto a barge at the port of Strasbourg.

Schüpbach notes that because of the height and weight of the unit, the main challenges for transporting the motor from France to Germany were likely to involve negotiating the use of only bridges that could handle the out-of-gauge cargo and the fact that the appropriate authorities might not agree on the necessary road permits for the whole route.

Nevertheless, Flytrans was more than happy to help, and in January it handled the pick-up of the cargo at the GE premises and the motor’s overland transport to the Port of Strasbourg, a French inland port on the river Rhine.

There, Flytrans oversaw the out-of-gauge’s cargo loading by crane onto a 110m by 11.5m river barge for the journey along the Rhine to a heavy duty terminal at Wesel DE. There, it was unloaded from the barge and loaded into a truck for overland transport over the last few kilometres of its journey with the help of a tracking company specialising in heavy lift movements.

Fabrice Mummolo, Flytrans’ Lyon-based industry cargo project manager, personally oversaw the loading of the cargo at the GE facility in Nancy and was then in Strasbourg to ensure the transfer of the shipment onto the river barge passed off smoothly.

He and his team overcame a number of obstacles in handling this particular shipment, he recalls, some of them already alluded to by Schüpbach; they included the very short amount of time available to secure the appropriate road permits in France for the movement of the out-of-gauge cargo as well as the careful preparation that was required for it to negotiate the confines of the approach to the Port of Strasbourg. 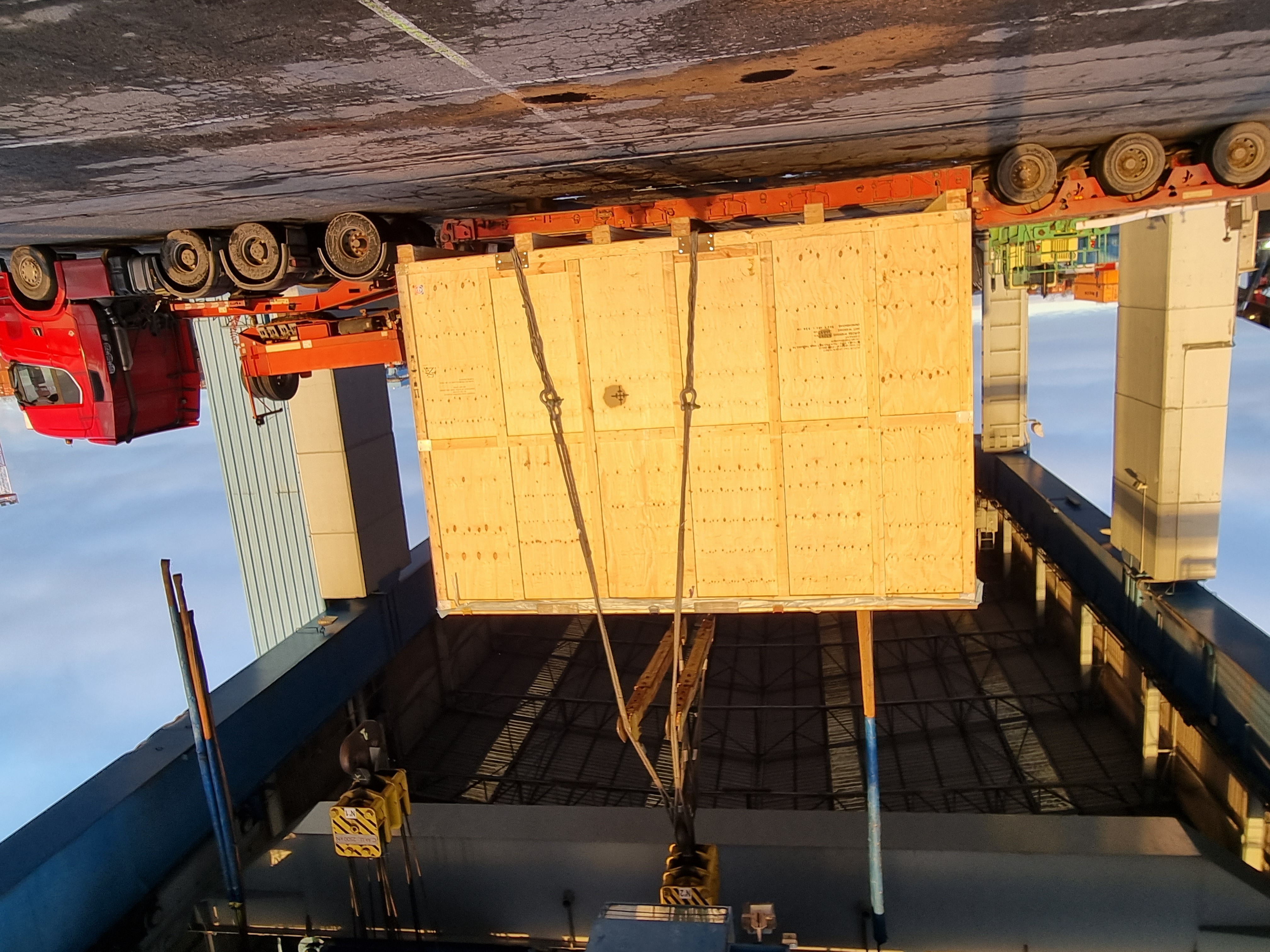 In fact, electricity cables and Christmas decorations had to be raised to accommodate the height of the box – there was in the end only 10cm of clearance between the top of the box and tramway cables. And the whole shipment had to be arranged and executed in quick time. The schedule involved loading at Nancy in week 2 of this year with delivery at final destination by week 4.

However, these challenges were all successfully overcome, says Mummolo, with very positive feedback then coming from both FMS and the end customer on Flytrans’ role in the complex transport.

Indeed, agrees Schüpbach: “The entire operation was truly a success story, since we delivered the unit before the given deadline and without any damages, which obviously made our client and their client in Germany extremely happy.”

While Flytrans and FMS had worked together on some general cargo shipments in the past, this project represented the first time that they had collaborated on a heavy lift shipment. But it was not the last. In April, for example, the two IFLN cargo agents co-operated on the movement of a 41-ton, 6.5m by 2.5m by 3.4m transformer from the GE facility near Nancy to Oberhausen in Germany.