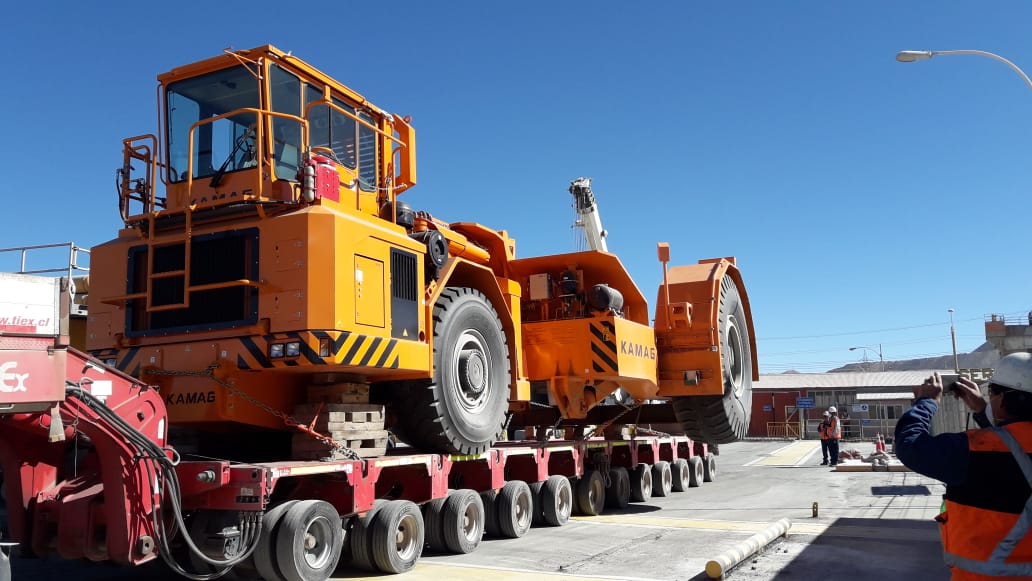 Three IFLN Network and IFLN Global Projects member forwarders – BTG Internationale Spedition of Germany, UCOMAR of Belgium and Noatum Logistics (formerly known as MIQ Logistics) in Chile recently collaborated on the multimodal shipment of a slag pot carrier and accessories from Germany, through Belgium to Chile.

BTG was approached by the client – a customer of the forwarder for more than 30 years – to handle the shipment right from pick up at the German factory to delivery at its final destination.

The huge weight and outsize dimensions of the vehicle – a slag pot carrier nearly 12m long, over 7m wide and nearly 4.5m high – meant that BTG had to carefully plan the move from the supplier’s factory to ocean-going port in what was just the first stages of the shipment.

The outsize nature of the consignment meant that it was not possible to send the low loader truck on public roads all the way from Ulm in Germany to the loading port in Antwerp. In fact, the “best and most economic option” was to initially transport the cargo to the nearest river barge terminal in Plochingen before taking a barge up the rivers Neckar and Rhine to the loading terminal at the port, explains Harald Sogorski, BTG’s overseas development manager.

So, the slag pot carrier and six accompanying packages containing accessories and spare parts were first moved ex works out of Ulm, Germany, carried by low loader to a barge terminal at Plochingen, near Stuttgart in Baden-Württemberg, southern Germany.

There, the cargo was transported by barge to the port of Antwerp in Belgium. And from there the project cargo was shipped by ocean-going vessel – one of specialist project cargo carrier BBC Chartering’s fleet of heavy lift specialist vessels – to Puerto Angamos in Chile, before being trucked from there on another low loader to its final destination at Chuquicamata, where can be found what is very possibly the world’s largest open pit copper mine. 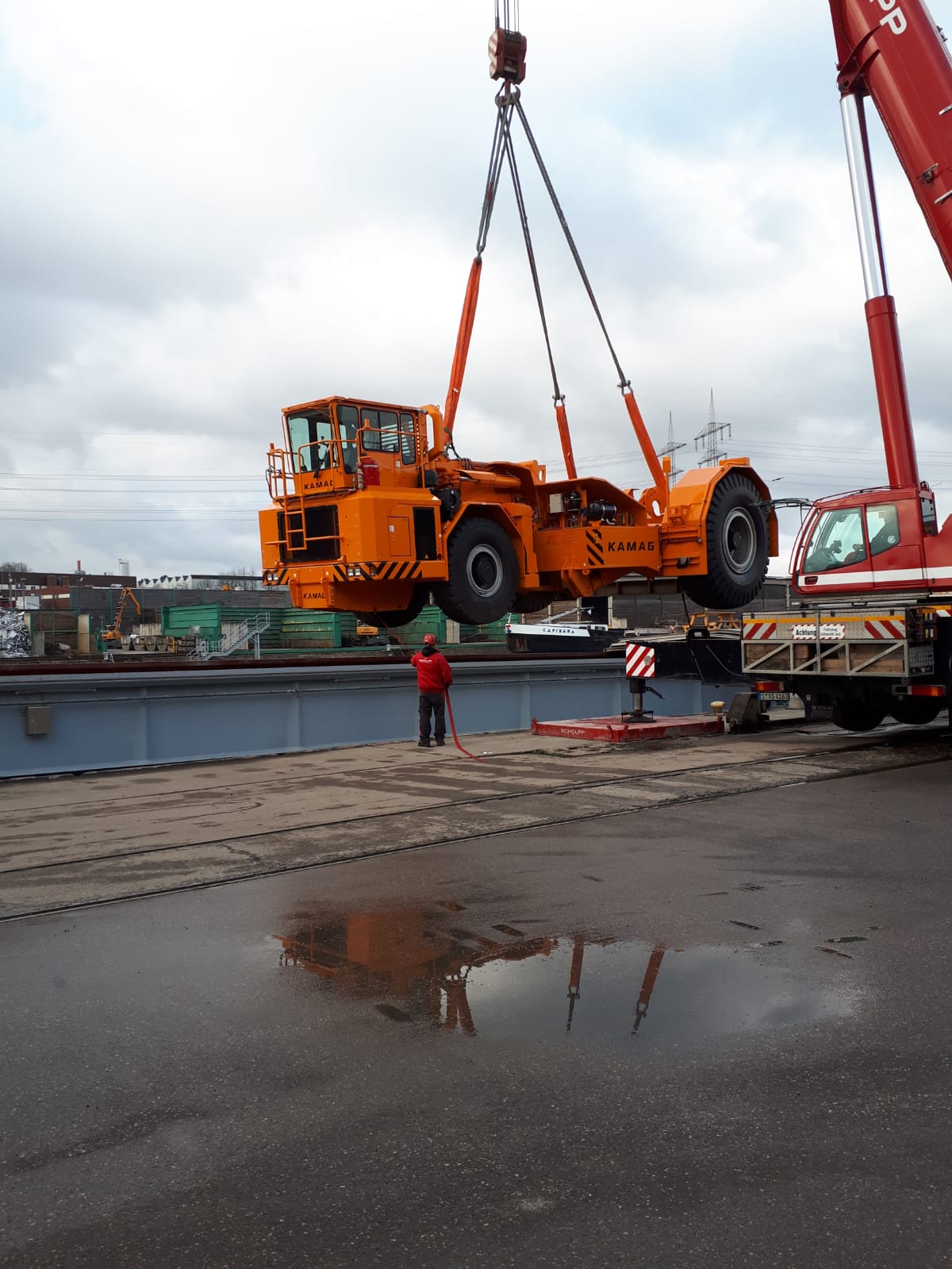 The slag pot carrier, a vehicle used to transport molten steel, weighed in at 80 tons, and the consignment as a whole weighed nearly 95 tons.  The cargo left its point of origin on 2 March and was safely delivered to Chuquicamata on 15 May, a success story only made possible by the continuous cooperation between the three forwarders.

In Europe, BTG Internationale Spedition handled the move out of Germany, while fellow cargo agent Antwerp-headquartered UCOMAR handled the port handling at Antwerp, export Customs clearance and the smooth loading of the outsize cargo onto the BBC Direction cargo ship.

UCOMAR has been BTG’s handling partner in Antwerp for many years, Sogorski notes. “We fully trust each other and there was no question at all about appointing them for the port handling [of this shipment] in Antwerp.”

Erik Wullaert, an expert in the transportation/trucking/railroad/sea freight industry at UCOMAR, recalls that the forwarder was contacted by Sogorski and asked to handle the transfer of the out-of-gauge cargo from barge to the quay side at Antwerp, its temporary storage and subsequent transfer to a heavy lift vessel. “It’s all about knowing all the players at the port, and preparing everything in detail well in advance,” he says. “That, together with the fact that we keep our clients and partners in the loop 24/7, makes it for them as if they were themselves present.”

The BBC ship departed the Belgian port hub on 1 April and docked in Puerto Angamos on 8 May. There, Noatum Logistics took over the cargo’s transfer to low loader and its move to the copper mine.

Noatum Logistics was chosen as BTG’s partner on this important job because, in its previous guise, MIQ Logistics had previously handled a shipment of accessories and spare parts from the same supplier being moved to the same end customer, and thus knew “all about the requirements of this consignee”, Sogorski points out. Moreover, in the event, “They offered a competitive package and did an excellent job,” he adds.

Gabriela da Silva, Noatum Logistics’ pricing supervisor, takes up the story. “Noatum Logistics was in charge of all the coordination [of the shipment] from the arrival of the vessel, unloading of the cargo directly to the truck and delivery to Chuquicamata.

“The successful unloading of the cargo was done with a land crane by hook maneuver, steel cables and chains. Then the cargo was transported to its final destination accompanied by private escort.

“We had to coordinate with our partner trucker the permissions of the truck three weeks before cargo arrival to avoid any problems with the authorities and secure the availability of escorts,” da Silva continues.

“The challenge for this kind of cargo is always to make sure that the unloading and the movement to its final destination goes well by knowing the lashing/lifting points and the route. With our experience and the help of our logistic partners of many years, we are able to handle this kind of shipments without a problem.”

Of the move, she notes: “Everything went well, and we were pretty happy with how it went. Our operation department was on top of this shipment all the way through, building on the partnership [with BTG] we have had for years now.”

Sogorski also confirms the cargo was delivered to the final destination according to schedule and as planned. The customer was delighted, pointing to the “excellent handling” of BTG.

“The whole operation went very well, and we will definitely work again with both UCOMAR in Belgium and Noatum Logistics in Chile,” he concludes.