Dubai-based Thomsun Mercantile & Marine and fellow IFLN member and distinctive member of the newly formed IFLN Global Projects network, Highland Forwarding of the US, came together recently to handle the door-to-door, time-critical delivery of a complex shipment of oilfield pumps.

The customer was oilfield equipment supplier MSI, and the cargo, which originated in Tulsa, Oklahoma, had to be moved from the US to Sharjah in the United Arab Emirates. The shipment weighed in at a total of nearly 17 tons, with the two individual oil pumps each weighing almost 7 tons. 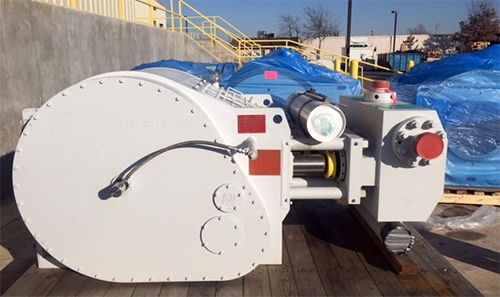 One of the two pumps that were carefully palletized for transport

Mathew Lonthyil Chacko, general manager at Thomsun, explains that Thomsun was nominated by the consignee to handle the task and, such was the urgency of the shipment, the decision was taken to move the freight on an AirBridgeCargo Airlines (ABC) B747 freighter routing from George Bush Intercontinental Airport in Houston via Frankfurt and Dubai World Central (DWC) into Sharjah.

Highland Forwarding was asked to negotiate the rates with the Moscow-based airline, which forms part of the Volga-Dnepr Group, as well as handle the shipping out of the US.

The two forwarders, working in close collaboration, saw the freight delivered safely and quickly to the consignee on 1 February, just a couple of weeks after the start of the shipment process.

Chacko is delighted with the cooperation, saying he would be “100%” happy to work again with the US cargo agent, a fellow member of the global IFLN Network. Indeed, Thomsun has collaborated with other IFLN partners in the past and would much hope to do so again in the future, he confirms. 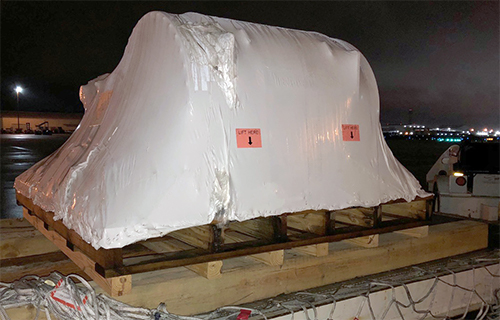 The cargo was moved door-to-door from the US to Sharjah in the UAE.

Rapid Reaction
Radek Maly, president of Highland Forwarding, explains that the pumps were securely packed on a 96x96x60 pallet, and the trickiest part of the shipment saw Highland Forwarding having to provide shoring materials to the airline in order to load and strap the cargo. That included, Maly recalls, fumigated 6x6x16-foot beams that had to be heat-treated.

Moreover, the shipment was on a “very tight schedule”, he notes. Hence the challenge when — with the cargo scheduled to be flown out of Houston the next day around noon — at the last minute on Saturday at about 8pm, Highland Forwarding got a call from the airline to say that there was not enough wood.

“They needed more, and so, we worked past midnight calling all contacts for wood supplies,” Maly remembers. “But, the end result was that we got the extra wood and made the flight.”

Clearly, the shipment involved numerous challenges, but these were overcome, and it represents good evidence of another successful collaboration between two IFLN partner freight forwarders.