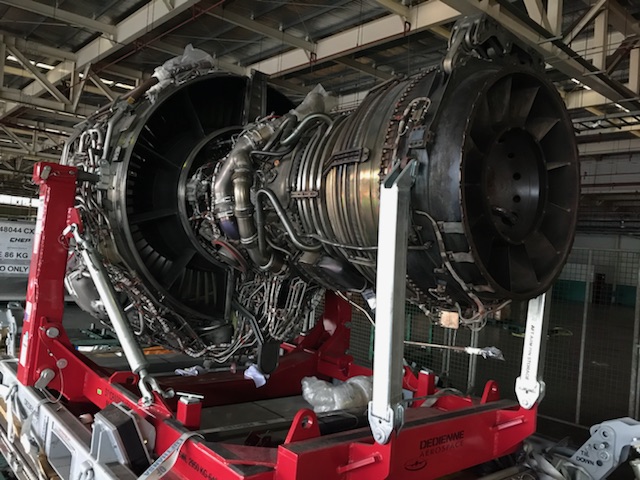 GSA, the engine prior to shipment

One engine was flown from Tan Son Nhat Airport (which serves Ho Chi Minh and surrounding areas) to Frankfurt Airport, the other from Tan Son Nhat to Miami International Airport in Florida. Each turbofan weighed in at 4.7 tons, with a volume of 23.54 cubic meters, so a freighter was required – specifically, two B777Fs operated by Lufthansa Cargo.

Bruce Le, overseas sales manager for the Ho Chi Minh-headquartered GSA, recalls that a number of challenges were associated with these particular shipments, not least the heavy competition between logistics companies for winning this sort of business, as well as the need for arranging heavy loading equipment in advance with airlines and the complexity of export Customs procedures for AOG consignments, with any mistake in a declaration likely to cause a very costly delay in shipping.

Because of the relative infrequency of available freighter services out of Ho Chi Minh, a delay of a week is more than possible if any mistake is made, and a huge storage charge would be suffered as a result (not to mention the delay in returning aircraft to service).