Canada’s Falcon International and Austria’s BTG Spedition & Logistik, both of which are members of the IFLN Network and the dedicated IFLN Global Projects network, completed their latest collaboration just this May—the shipment of a milling machine from Linz in Austria to Brantford in Canada.

This complex logistics mission was successfully executed thanks in large part to the cooperation between these two project cargo specialists, making full use of their IFLN Global Projects Network connections.

The milling machine weighed over 75 tons, while the weight of the consignment as a whole totaled more than 113 tons. With a total volume of 545 cubic meters, the outsize load took some careful handling and genuine expertise in project cargo shipping, especially given that the shipment required intermodal transport by truck, barge, ocean-going ship, before another barge and further trucking to final destination.

Thomas Hafner, vice president at BTG Austria, describes some of the challenges involved: “We had been working on this job for almost a month [prior to the initial cargo movement]. The goal was to deliver the freight before the end of 2017 at the job site in Canada. However, delays in production and other last-minutes changes destroyed our whole schedule and plan.”

Noting that the Great Lakes close to navigation during the winter time, Hafner explains: “Originally, we had booked the last sailing of 2017 from Northern Europe into the Great Lakes, which was on a Spliethoff vessel to Ramey's Bend [at Port Colborne, Ontario] in the middle of November. Due to the delay in production, however, we missed this last sailing of the year."

“Thus,” Hafner continues, “the client instructed us to bring the whole shipment to Antwerp for storage until the Great Lakes re-opened again in 2018.” As a result, the ‘pick-up by a specialized truck was arranged for transport up to the heavy lift port in Linz on the River Danube. Then, barge transport was arranged up to Antwerp via the Rhine-Main-Danube Canal, and the cargo’s storage there for almost four months.’

Following that hold-over, the next step of the milling machine’s transport to its final of destination (Brantford, south-western Ontario), was the cargo loading onto the ship Qamutik and its sailing out of Antwerp in mid-April. 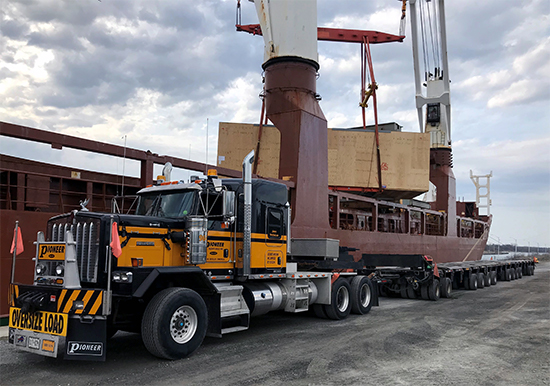 The cargo was trucked from Hamilton to Brantford on the final leg of its journey.

“Arriving in Ramey's Bend in early May, the handling of the outsize shipment was then taken over by BTG’s fellow IFLN project cargo member, Quebec-based Falcon International. “Falcon was responsible for delivering three crates to Brantford, Ontario, from Ramey’s Bend. The 75-ton crate was unloaded from the Qamutik onto a 12-axle roll trailer and then, loaded onto a barge, where it was tied down for the journey to Hamilton. The transit time between Ramey’s Bend and Hamilton was just under 20 hours,” said Falcon’s project manager Alexandre Van Gent. “Bucket trucks, civilian escorts, police escorts and permits also had to be arranged for the cargo’s onward transport to its final destination in Brantford,” Van Gent informs.

“Like BTG, Falcon too had to be agile in its thinking to overcome the challenges involved in this complex shipment. As well as the change in schedule as a result of missing the last pre-winter voyage into the Great Lakes, careful thinking was required to minimize the costs involved,” Van Gent says. “To avoid high engineering costs, the idea to barge the largest crate to the port of Hamilton in Ontario from Ramey’s Bend was accepted by the client,” Van Gent explains.

A barge carried the consignment from Ramey’s Bend to Hamilton.

“An ad hoc ramp was manufactured near the ship’s berth to enable the barge to dock and the cargo to be rolled on. With the help of our trusted heavy-haul trucker and partners in Hamilton, Falcon was able to deliver a complex cost-saving solution while delivering the cargo on time,” Van Gent confirms.

This latest example of teamwork on a challenging shipment is the latest in a line of such collaborations. “Falcon and BTG Austria have a long history of successful projects,” Van Gent recalls. Furthermore, he says: “We strive to offer full transparency during all our transport projects, allowing our partners to provide a full overview to their clients on the current status of their transport.”

Hafner also points out the value of partnerships between members of the IFLN Network and its Global Projects network offshoot. He describes the close relationship with Falcon as having been just 'perfect'. And, Hafner adds: “It was a pleasure to share more business within the IFLN Project group.”

Falcon International and BTG Spedition & Logistik are just two of the numerous freight forwarders that now form part of the IFLN Global Projects network, a group that offers shippers a one-stop-shop for project forwarding expertise.