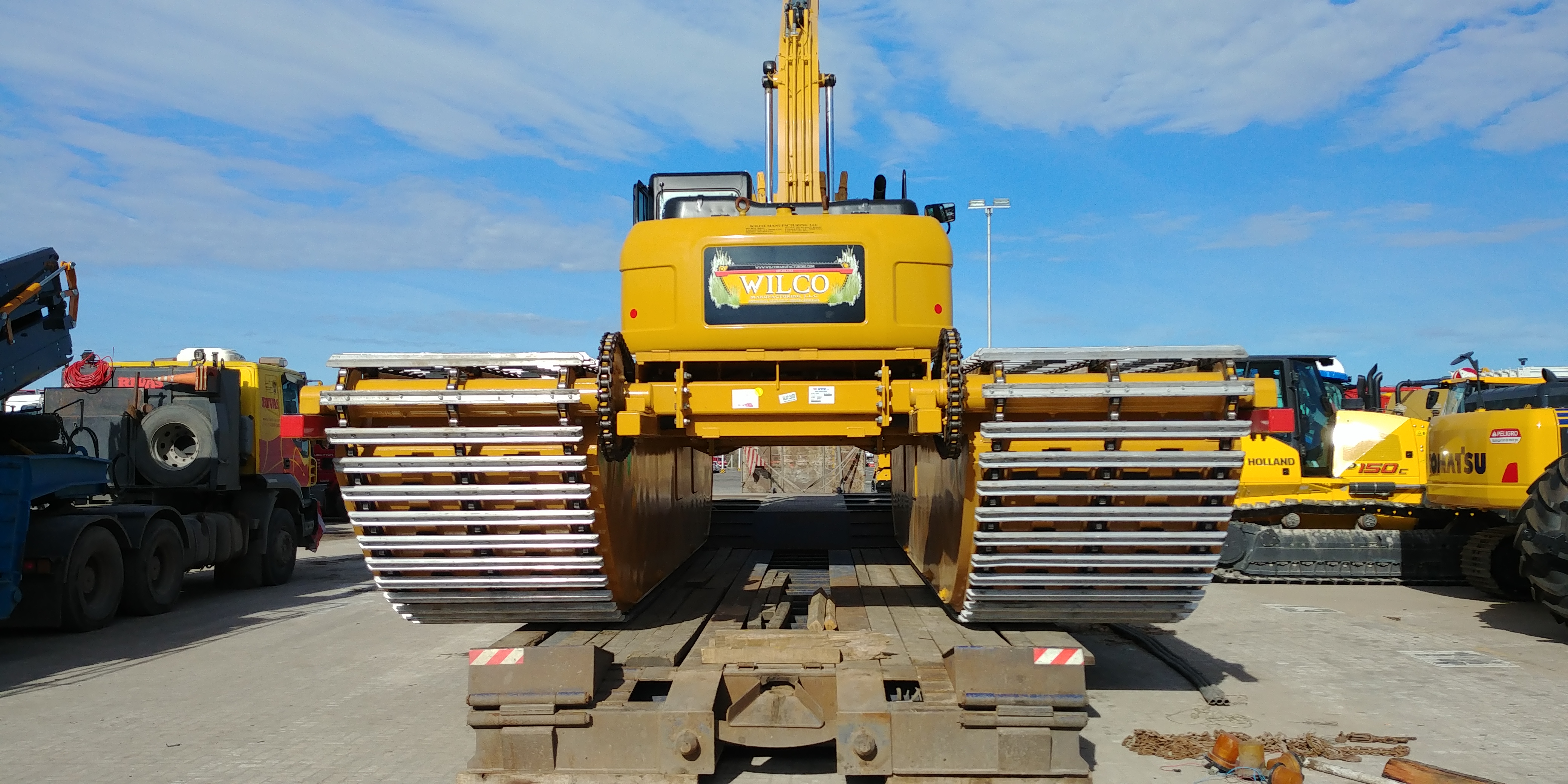 IFLN forwarder Clippers Argentina and fellow IFLN cargo agent Highland Forwarding, both members of the IFLN Global Projects network, have collaborated on the transport of two massive amphibious excavators – a Wilco Cat 3200D2 and a 3290F – from Louisiana in the US to the final customer’s premises in the heart of the Pampas in Argentina’s Buenos Aires Province.

One of Clippers’ longstanding clients, an investment bank, gave the EXW job to the Buenos Aries-based forwarder. The excavators weighed in at 29 and 38 tons, and had volumes of 285 and 457 cubic meters respectively. As a result, therefore, the road transport of the cargo was “quite a challenge”, recalls Clippers director Captain Jorge Miranda.

Each excavator was mounted on huge pontoons for the journey, with special low-load vehicles required for road transport both in the shipment’s country of departure and origin.

“In the USA, IFLN member Highland Forwarding, was asked to provide not only the required documentary requirements, but transportation from the vendor's facilities in Lafayette, Louisiana, as well as all related services from EXW to FOB Houston,” Miranda observes.

This was the first time that Clippers had collaborated with Highland’s Houston office (Highland is headquartered in Boston, with offices across North America). Highland Forwarding owner and president Radek Maly takes up the story. “Shipping the machines fully assembled, it was a very wide cargo.”

“Plus, the sailing schedule was also a challenge: We had to switch shipping lines at the last minute due to the long connection on the original booking,” he says. “However, the shipment all went very well despite these potential problems,” Maly points out.

Both amphibious excavators were loaded individually onboard a RoRo (roll-on, roll-off) vessel for the ocean-going voyage to South America. The cargo having been picked up from Louisiana at the end of April, was loaded onto the RoRo vessel on 8 May and arrived in Zarate after 32 days on 9 June.

Miranda remembers that thanks to all the relevant preparatory work having been undertaken prior to shipment, all the steps involved in Customs brokerage in Zarate could be swiftly handled, enabling an expeditious transit of the cargo through the required port procedures and thereby avoiding any potentially high additional costs at the terminal. 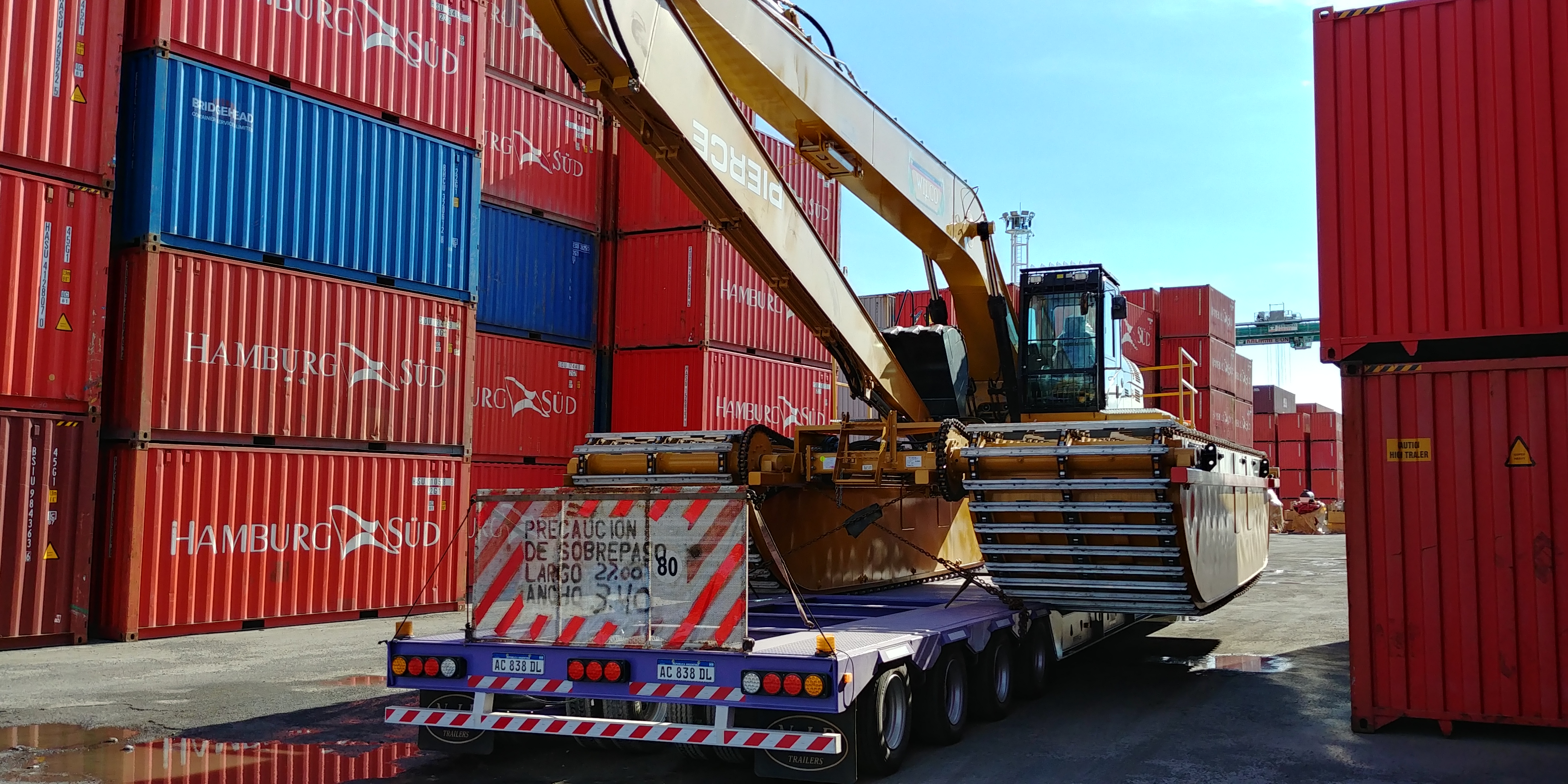 “Again, road transport to destination was a challenge. However,” says Miranda, “our experienced teams were able to overcome the inconveniences in a timely manner. Keeping in mind that the excavators occupied the width of almost the entire road, and also that the tracks of these excavators were wider than the low-bed trucks, loading operation were very risky.

“Plus, transport to the final destination, on the outskirts of Greater Buenos Aires, had to be cancelled, as the consignee realized at the very last moment that due to the excavators’ dimensions it would have been impossible to gain access into the customer’s premises.

“Consequently, the final consignee required of Clippers a special logistics solution: to disassemble each excavator in another warehouse, transport it to its place of work in separate pieces and then re-assemble them, since otherwise it would not have been possible for them to reach their final destination, the banks of the River Salado in the heart of the Pampas.”

As a result of Clippers' hard work with Highland Forwarding, “We achieved smooth shipping co-ordination and once again highlighted the successful teamwork of two members of the IFLN and IFLN Global Projects networks,” Miranda points out.

“We would of course be delighted to work with Highland again,” he adds. As for Maly, he declares: “We [Clippers and Highland] have both been in IFLN for 15 years, and Clippers is definitely a good partner to work with.”

Maly actually met up with Clippers at IFLN’s annual conference in Montreal, Canada, in late April this year, and discussing everything in person with his IFLN agent colleague was very beneficial, he says. This highlights another potential benefit of the ever-popular yearly IFLN forwarder get-togethers, which this year will be in the lovely Austrian capital of Vienna.