Reliance Proves its Worth

Reliance Freight Systems, the Dubai-headquartered IFLN forwarder, handled a particularly interesting job for Wonder Park LLC, just one of its many customers—the dismantling of the rides of the Dubai Wonderland theme park in Jebel Ali, Dubai, and shipment of the various pieces to Europe. There, the rides are to be renovated and set up as an attraction in the Netherlands. 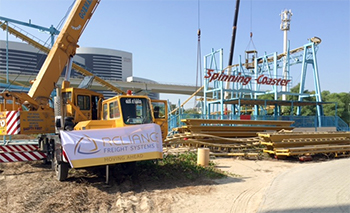 Reliance Freight Systems took on the tough task of dismantling Dubai Wonderland’s theme park rides before seeing their shipment all the way to Antwerp.

Having won the tender over 25 other competing bids, Reliance was asked to handle the complete job, explains the company’s projects manager, Royson Mazarelo – who also led the Reliance work teams at the Wonderland park. This included initial survey, the dismantling of the various rides of the theme park and then, packing and loading of the freight onto vehicles for the road-based aspect of their long journey. Next, the cargo was loaded by crane onto an ocean-going Hapag-Lloyd vessel for shipping to the port of Antwerp, Belgium – again, all under Reliance’s careful guiding hand.

Most of the rides were very old; thus, the machinery was both rusty as well as cumbersome, making the dismantling task quite awkward. Moreover, markings on the rides had deteriorated and were not always visible due to extensive weathering, while nuts and bolts in many cases could not be loosened and so, had to be broken. Plans of the rides that would have made the task easier were also not available. This meant that each piece of equipment had to be labelled manually; tracks were stacked in order and nuts and bolts even had to be labelled and packed separately. 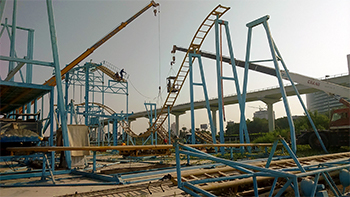 It was only with the help of specialist machinery and tools that each of the rides could be safely dismantled.

It was only with the help of machinery and tools, such as gas-powered cutters, grinders, a number of cranes and skilled manpower, that each of the rides could be dismantled safely and without damage. In fact, Reliance employed two 50-ton mobile cranes, two 3-ton forklifts and four gas cutter cylinders amongst its specialist equipment on-site.

And that was even before the job of shipping the loads to Antwerp had begun! The total weight of the shipment was more than 350 tons, while the heaviest individual piece was a cumbersome 28 tons, so it was no small task.

Although a huge job, Reliance completed it well before the deadline and to the customer’s complete satisfaction.