IFLN’s 25th Worldwide Membership Conference is to be held next year in the Canadian city of Montreal between 22 and 25 April. Fellow IFLN members, including the all-new IFLN Global Projects group, will come together for a week of invaluable knowledge sharing, networking, and camaraderie. 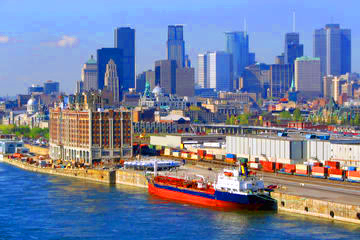 The Port of Montreal is one of the biggest ports on North America’s East Coast.

Canada’s State of Trade
Montreal, a key location for the freight forwarding industry, was carefully chosen as IFLN’s next meeting destination.  The city – the largest in Quebec and the second-biggest in Canada – is one of the biggest ports on North America’s East Coast and is a major point of entry and departure serving the huge volumes of trade flowing between Europe and North America.

There are opportunities for forwarders to benefit from Canada’s international trade as indicated by “positive signs of export and investment growth in Canada,” says François-Philippe Champagne, the country’s Minister of International Trade.  On Canada’s State of Trade, Champagne explains: “It’s especially encouraging to see that Canada’s exports to member countries of the European Union rose in 2016, as did our exports to China. Canada’s ambitious and progressive trade agenda is creating new opportunities for export. Our prosperity is fundamentally linked to the global economy.”

IFLN's Outlook for 2018
While North America and all its abundant business opportunities will be highlighted at the Conference, another major focus of the event will be building on this year’s launch of the  IFLN Global Projects network and its growing group of dedicated project cargo forwarders. Only cargo agents with experience and a high degree of capability in the field of project forwarding will form part of the rapidly expanding group, explains IFLN president Michel Vanlerberghe, who adds: “We want to be the new force in the world of project logistics management.” The Conference venue allows for both networks to meet jointly and on their own, providing a forum for IFLN members to develop all-important relationships with their overseas counterparts.

This Conference will also build on the success of the last event. Members provided an enormous amount of positive feedback from the 24th Worldwide Membership Conference in the Philippines, especially noting the impact of having large numbers of critical decision-makers in attendance. In fact, the excellent attendance of the annual Conference this year saw more than 270 freight forwarding professionals from 65 countries come together, 89% of whom were senior managers and key decision-makers.

Another highpoint of the 2017 conference as shared by IFLN’s high-level professionals in attendance was the One-to-One Meetings that offered members a unique opportunity to develop new business relationships as well as to strengthen existing ones. As such, the One-to-One Meetings remain to be a significant component of the conference program each year; they take place on all three days of the event, giving IFLN members that critical face-to-face time with overseas colleagues in which they can share business goals, discuss strategies to strengthen existing partnerships and solve pressing business challenges with their peers – all of them knowledgeable experts in their field.

Conference Venue Carefully Selected to Welcome IFLN Members
Le Centre Sheraton Montreal Hotel, ideally positioned in the heart of downtown Montreal, right next to its Underground City, the city’s central business district linked by underground passages as well as by the city metro, was carefully selected as the official conference venue. The Sheraton provides a comfortable and friendly atmosphere ideal for easy networking alongside all the facilities needed for a major conference event. It also is a short walk from excellent restaurants and from the shops of St. Catherine Street.

Looking Ahead to the IFLN 25th Worldwide Membership Conference
More than 300 IFLN colleagues are anticipated to attend the Conference in Montreal between 22 and 25 April. Attendees will come together to reap the invaluable benefits of their IFLN membership, capitalizing on the opportunity to once again meet with old friends and colleagues, as well as to make new contacts and learn more about IFLN’s plans for the future.