The movement by road to Ho Chi Minh was an incredibly complex task,
requiring careful pre-planning and meticulous execution.

Ho Chi Minh City-based Vantage Logistics Corporation is a member of the wider IFLN Network and the all-new IFLN Global Projects network. Its success in the recent handling of an outsize project cargo movement,  after overcoming a series of major challenges that might have defeated many another forwarder that doesn’t have its outsize cargo transportation experience, offers evidence of the capability of both Vantage and of the value of IFLN’s dedicated project forwarders.

Vantage oversaw the movement of a large consignment of outsize cargo from a factory in the Ben Cat district of south-eastern Vietnam’s Binh Duong province to Ho Chi Minh’s Lotus port (from where the freight was shipped to Malaysia). A total of 29 individual pieces of outsize cargo were moved, the largest being 21m long, over 5m wide and nearly 6m high; that piece alone weighed 44.5 tons. The loads were shipped in support of a major refinery and cracker project. 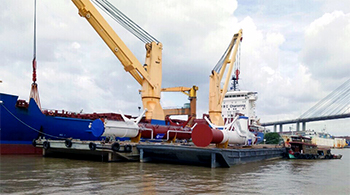 The cargo was shipped out of Vietnam to Malaysia by way of Lotus port.

According to Vantage Logistics’ general manager Florence Lam, there were plenty of challenges that needed to be overcome if the shipment was to be safely transported along the route. These included more than 20 low-hanging electricity and telecommunication lines for which permission had to be granted from four different local authorities for them to be either raised or cut. The approval of four authorities was also required for the movement of such a heavy and outsize shipment by both road and water; thus, says Lam, “A very detailed working plan was required for smooth co-operation between us and the relevant authorities.”

When it came to the time to move the loads, a dedicated Vantage team spent three consecutive days and nights at the point of pick-up, along the route and at the port of Lotus. They checked the cargo’s status before pick-up, controlled operations along the route and then ensured the safe lifting of the shipment under-hook onto the vessel Everest operated by BBC Chartering.

Since project cargo shipping is a key part of their business, Vantage will be one of many freight forwarders within the new IFLN Global Projects network that will offer shippers a single-source solution for project forwarding expertise. Lam is in, no doubt, about the value of the new establishment; she explains: “IFLN is new compared to other existing project networks, but IFLN has a creative and innovative way of approaching the project logistics industry, as well as potential project clients. Members are focused and keen to cooperate to achieve their goals.”