Jacksonville, Florida-headquartered Crowley Logistics and IFLN partner Ibistek-Crowley of Accra, Ghana, recently collaborated on the shipment of 45 separate pieces of heavy construction equipment to Niger, Africa, in support of the US armed forces operating there. It represents another example of IFLN members collaborating for the benefit of all concerned. 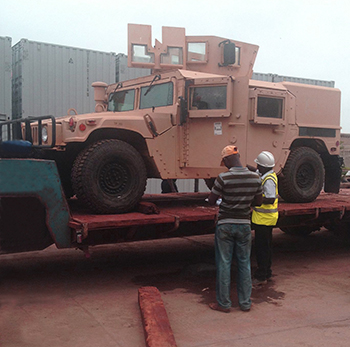 A Hummer military vehicle is readied for the overland convoy
movement out of Lomé.

Extensive planning and co-ordination for the task started as far back as February, when key stakeholders from the US Government and industry mapped out a detailed concept plan for operations that involved customs clearance, convoy security, transit monitoring and extensive delivery co-ordination with US military end-users in Niger’s capital of Niamey and the town of Agadez.

“Over the course of nearly six months of operational planning and execution, we collaborated to find solutions to the numerous challenges to providing a comprehensive logistics and delivery service,” said Jack Scogin, manager, government operations for Crowley Logistics. “Whether it was floods, sandstorms, washed-out bridges or even the personal sacrifices made during Ramadan, Crowley’s team and our partners displayed the work ethic and enthusiasm that its customers have to come to know and expect.”

On 3 May, the pieces were discharged in Lomé, the capital and largest city of Togo situated on the Gulf of Guinea, from the Intermarine vessel Ocean Giant, under the watchful eye of Ibistek-Crowley Operations Manager Prince Azumah. Azumah ensured the swift and efficient dispatch of the units from the port by employing Ibistek-Crowley’s local know-how, its business acumen and by securing co-operation from the numerous host nation government agencies and commercial entities involved with customs clearance, truck allocation, union co-ordination and transporter assignment. 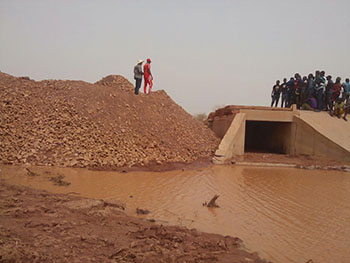 This washed-out bridge was just one of the many obstacles that
the convoys had to contend with.

To the north-east, Scogin operated from Niamey and Agadez to ensure seamless delivery of the cargo to final destination. On a daily basis, Scogin served as an information conduit between drivers plying the long Niger roads, agents handling customs clearance and truck escort formalities at numerous checkpoints, and US military personnel anticipating the timely arrival of the cargo.

The cargo moved overland in convoys, with the first convoy reaching its destination on 17 June, and the last on 20 July. Delivery was on schedule despite the inherent challenges of logistics in West Africa, such as weather and queues at border crossings.

“While Crowley is no stranger to challenging projects, this operation was among the most complex and sophisticated in my memory,” said Crowley’s John Myhre, director of logistics. “When performing these types of projects, we never forget they play an important role in supporting US military personnel and their missions, and Crowley’s full range of expeditionary services provided a complete solution.”